Ubisoft released a trailer for the collaboration with NieR: Automata, where Inna features 2B YoRHa Elite skin. This skin bundle can be purchased from the in-game store of Rainbow Six Siege now. 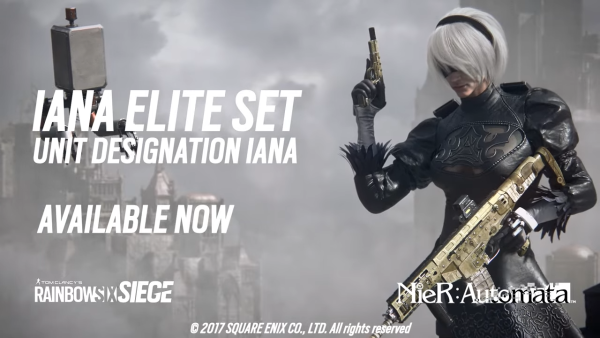 It is not a surprise that Rainbow Six Siege introduced 2B for all the Iana fans, as the game has already collaborated with Capcom and Adult Swim before, as they released Leon Elite set for Lion, Jill Valentine set for Zofia, and the Rick & Morty set for Fuze and Doc.

How to Get the Iana Elite Skin Set in Rainbow Six Siege?

The Iana 2B YoRHa Elite set can be purchased from the in-game store of Rainbow Six Siege for 2160 R6 Credits. Players who buy the Elite Skin bundle will also receive a bunch of additional rewards including cosmetics, a weapon charm, a player card, and weapon skins for the Assault Rifles.

The upcoming expansion Operation Solar Raid will be released on Dec 6, 2022. Players who buy the Premium Battle Pass will get a 10% discount on upcoming season purchases. And the Year 7 Season 4 will be arriving in December to celebrate Rainbow Six Siege's seventh birthday, introducing a Colombia Operator Solis and a new Nighthaven Labs Map set in Singapore. Watch the tips and guides for the Solar Raid Gameplay.